Today is our silver wedding anniversary… I’m going to put up a bunch of wedding pix randomly in the story of us.  Hope you enjoy.  I’m posting this 1) because I want to and 2) for hope.  Some of y’all don’t have hope. 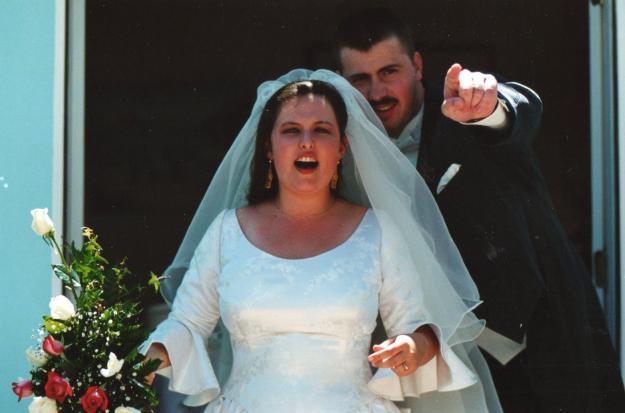 My reaction to DH tossing the garter. He *totally* tricked the best man into catching it.

I don’t remember the day I met my husband.   God chose us for each other when we were kids, and He slammed us together repeatedly until we got the idea and stuck. 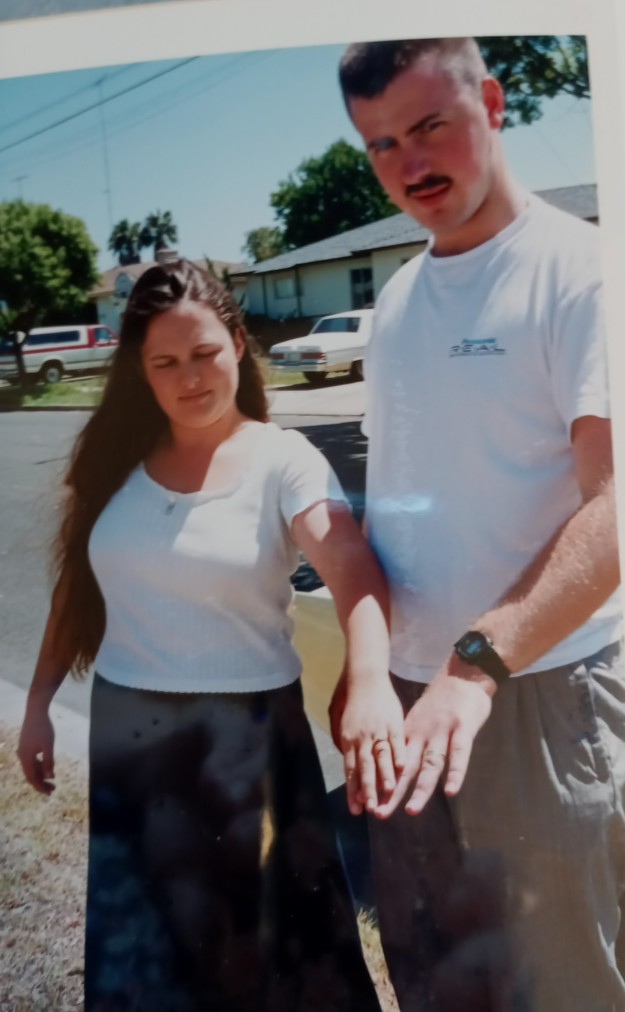 We were in elementary Sunday School together.   We didn’t know each other.   I can remember him – the big guy I thought occasionally showed up slumming from Jr. High.  He’d sit in the back.   I remember my mom doing an object lesson with sin and string and using him… and how he snapped the string and my mom was like, “Okay fine, but pretend it’s still there”.   We were in a Sunday School play together in 4th grade.   I still didn’t know him, though somewhere there’s an incriminating photo of our interaction on stage with him wearing a bunny suit.   But I didn’t know him. 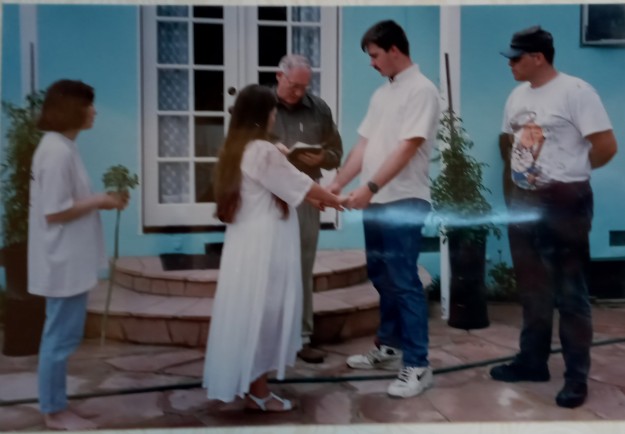 Rehearsal photo. With BFF and our friend D. What? Security issues? -laughs- Actually D did have to do some security at the wedding. But that’s another story… 😀

I remember the first time he spoke to me, in junior high Sunday School.   He got me to show him my blouse (that I was super uncomfortable with) and told me how pretty I was.

We went to different elementary schools.  Lived in different parts of town.  (His house was an hour’s walk from mine, and our town had about 70K people at that point).   There’s no reason we should have met.

I remember the year he brought a kid trick or treating to my door and flirted with me.   We were 13.  Why did he walk an hour to trick or treat?  How did he end up at my house?

I remember him giving me compliments in HS, walking by the library in the early morning. 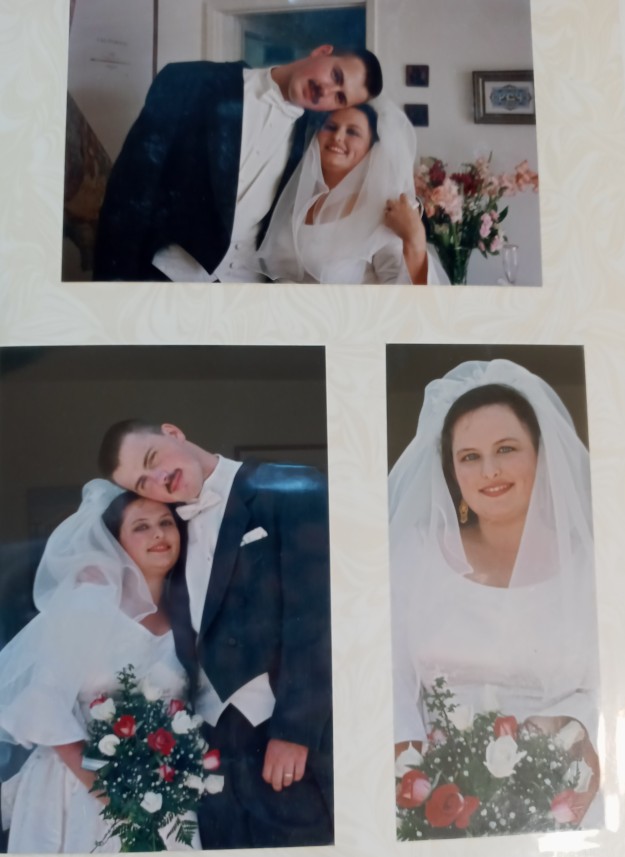 And all of that was before I knew his name……

We mark (okay, I mark, he’s less squishy than I am) when we started “dating” by St. Patrick’s Day in our Freshman year of HS.   We took “Contemporary Living” (aka sex ed and how to write a check) together.  I finally FINALLY figured out that he was my age, not a slumming upperclassman.   Just very tall, and how many 14yo have mustaches?

Our dating wasn’t linear.  He broke up with me a month or so in, but then we were confusing kinda friends who hugged a lot.  Then the next year we were an item but not really an item and … yeah.  Do you remember high school?  -shakes head-

Then his dad died, at the end of our soph year.   R disappeared a week before school let out.  No one knew why.  His bestie thought it had something to do with his dad.   No one answered the phone at his house.  (This is because he left town).  Era pre-cellphone, kids.  You had to live with a mystery. 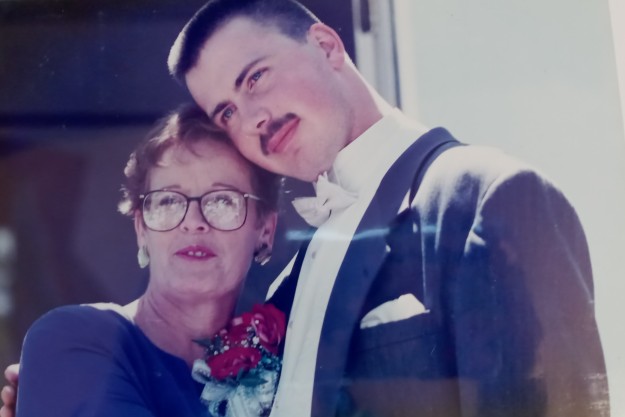 Junior year was one big soap opera.   I finally gathered that we were broken up when he wouldn’t quit throwing bits of shrubbery down my shirt… then we got back together.  And then (after quite a while) we told other people that we were back together.

We were inseparable senior year, and went on our first “date” that anyone would call a date… prom.   Likewise the next two years, while we went to junior college.   Well, in the day.  I had a job, he had adventures.   I went off to Santa Cruz for college.  I needed to do that for the parental separation stage, but it was brutal for our relationship.  But we made it through.  And when I got home, we got engaged.   Six months later, on my birthday, he let me tell people! 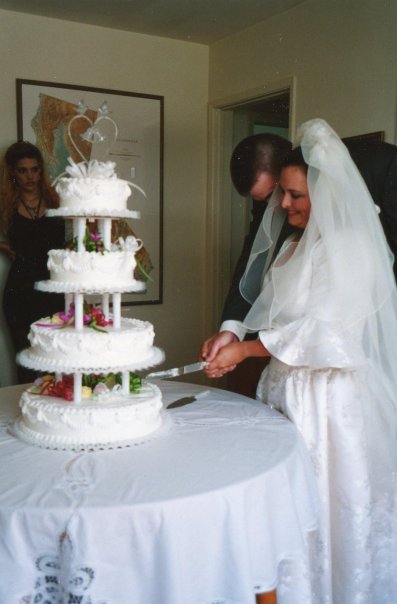 Cake. Our friend H in the background, who was *not* my friend at the time, hence the skintight black dress, pentacle, and fishnets… although I really do think the 4″ heels were a bad plan to a backyard wedding! She maintains I should be glad her (male) date didn’t wear the dress… apparently he was thinking about it.

Our marriage hasn’t always been linear, and we’ve had plenty of bad times.  We’ve also had a lot of good times.   I love my husband far more today than the day I married him.  I cherish his heart.   He takes such beautiful care of me, of our two kids (nearly grown now), of our friends, of my family.   He looks after us and shepherds us and pushes us and helps us get where we need to be.   We’ve both grown up.   Together we’ve gotten closer, separately we’ve gotten stronger, and I could not imagine my life without him in it. 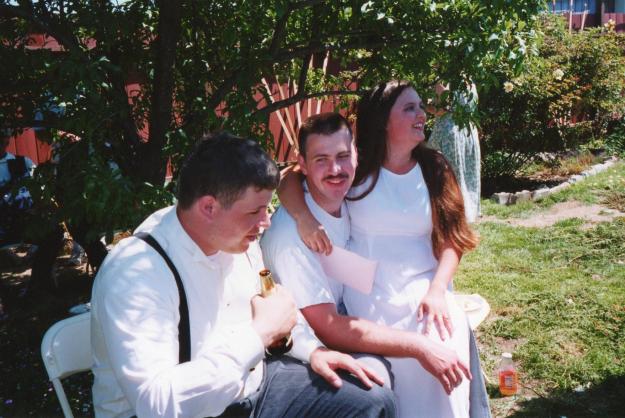 Going away dress. Yes, I’m lap-size. This is at the point in the wedding where I actually regained the ability to do more than smile and hug people. I was happy enough people thought I was drugged. I wasn’t. I was just very, very, happy.